Geek Of The Week 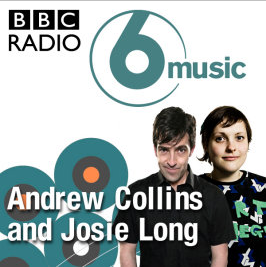 At London Stinkpipes we are huge fans of the Collings and Herrin podcast, having been a Richard Herring fan throughout his career, and also a fairly avid follower of Andrew Collins' work from the NME days, via various magazines including The Word, to appearances all over the BBC, and not just standing in for people these days either.
This meant that the Collins and Long show, replacing Adam & Joe, is a firm favourite at LS HQ. When we heard they were running a Geek Of The Week slot, inviting nerdish obsessives to air their works, our ears pricked up. this was a chance to get stinkpipes to the world, via BBC 6Music.
So last week a call went out, via Twitter, to Andrew Collins, asking if we could be featured on the Geek of the Week slot. After numerous communications a call came from a 6Music producer, can you talk on the air in 5 minutes? Then another call, sorry, we meant 2 minutes; and then Mr Collins himself came on the line to say hello and put me at my ease. As the strains of The Smiths came to the end I could hear Long & Collins talking, then the GOTW jingle, and I was on!
I can't remember a lot about it now. I think I failed to get over the majesty of the best, elegant designs to be found on stinkpipes, and I never got asked the question I thought was a dead cert - what is my favourite stinkpipe (Fred Bird - my avatar). But I think I was coherent, didn't ramble, say anything weird, or say f**k or bugger, and responded to everything I was asked in a fairly succinct and pleasant manner.
I've had a little bit of positive feedback from twitter; but if you haven't heard it yet then listen to it here, on the iPlayer. I'm about 45 / 50 minutes in.