Links to other sites: Bollards Of London


This is fantastic, and in a way, I wish I'd thought of it first. More bollards than you can shake several sticks at, and some you'll probably be very familiar with. I'm particularly familiar with the 'Vauxhall Three', so I'm glad they're in there.

I haven't worked out how to put links on here yet. It's new Blogger and only seems to offer a series of predesigned templates, wheras i used to go in and edit the template code directly. Can't see how to do that now!

I'm sure I'll work it out - anyway. Remember while you're out hunting for stinkpipes, keep an eye out for bollards too!
No comments:

If anyone is slightly confused by the disconnect between the "mission statement" I have printed under my Cat avatar, and the actual contents of this blog then you may be interested to know that this is because I have more than one blog on blogger, and blogger seems to want to use the same biog details for all my blogs, even though the one it uses was only really written for a long running and occasional blog i call "Dispatches From The Cat".

so please ignore it, my anarchism, and my views on cycling are hardly relevant to the stinkpipe adventure we are all embarking on.

I will try to find a way to remedy this obvious problem, but it might take me some time. I'm not so good with computer software, better with solid engineering in the real world! 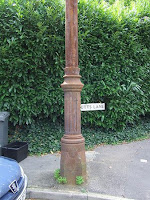 The one bad thing about calling a blog London's Stinkpipes is that it then becomes difficult to cover stinkpipes found outside London.
So these are pictures the team took while searching the Godalming area several years ago now, but never before published.
The design is unique, and I remember that there were certainly more than one, and not all completely accessible. 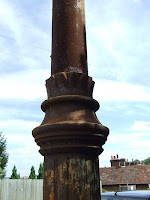 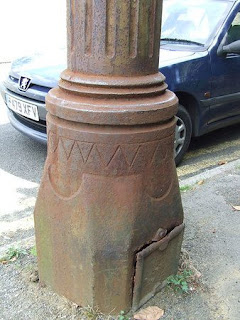 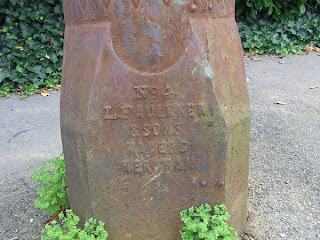 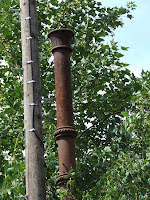 There was an inscription on the base. I thought the overall design was rather attractive
No comments:

We've actually been able to log into the old Blogger site "London's Stinkpipes" and put on there a redirection to this blog which we have decided to continue with, rather than go back and start trying to edit something we stopped maintaining over three years ago.

But it does mean we have access to the photos and messages that were left in the meantime, and it also means we now have Stinkpipes.blogspot.com and Stenchpipes.blogspot.com. It all helps people to find us.

And remember - if you see a stinkpipe, photograph it if you can, record it's location, and send to us via Twitter @stinkpipes or by email stinkpipes@gmail.com

Or leave a message on this blog

Just a quickie to record that while on the train heading into central London today I saw a green, fairly large stinkpipe sticking up behind a wall right next to the railway line, just past Blackheath station.

Now I need to go back with camera, GPS device, and independent means of transport (bicycle).
2 comments:

I used to record the locations of all the stink pipes I discovered in an AtoZ with a black marker pen. This was obviously inadequate, and even more so after I lost it.

Luckily I seem to have remembered most of the locations; this is a feat which i can only manage with information that others consider to be useless.

Through the next few months I will be bringing over entries from my previous blog, mapping the individual pipes as I copy them over, recording types, features and posting photographs.

By the end of the year i hope to be fully up to date.
No comments:

A work in progress - a map of all the stink pipes as I become aware of them. I've put my local one in as a starter. Later I'll add a photograph and some details. I hope that this can become a central resource for stink pipe fans everywhere.

Note from the future: Having weighed up the pros and cons have decided to use Google Maps as Google Streetview is an invaluable tool for checking locations of stinkpipes!
No comments:

Each week we solve one of London’s great mysteries (as submitted by you, the reader). This week, Jane Thornberry from Wimbledon asked: ‘I was visiting an old friend in Hampton Wick recently and came across this strange, ornamental iron pipe at the end of her street. What on earth is it?’
To find out the answer, see this week’s Time Out Magazine or post your answers below. Have a London Mystery you want solved? Comment below or tweet us at @TimeOutLondon.

time was a few years ago when I used the word "stinkpipe" i would usually find myself corrected with "stenchpipe". Seems now that everyone has embraced "stinkpipe" - and so we should!

In 2004 my wife and I started photographing and seeking out an item of street furniture which until then we had barely noticed. And when not completely invisible, we had no idea what it's function was.

These poles, scattered around south London, as it soon became apparent, were an important part of our sewer system, designed to release excess gases that build up down there, and also designed to release those gases high enough into the air that the smells would not offend London's gentle-folk, going about their lawful business.

We started photographing - noticing the sometimes ornate designs, and manufacturers' stamps to be found on them. Attempted some research into the history and started mapping them across London.

since then the blog was set up http://stinkpipes.blogspot.com/ but fell into disuse about 2/3 years ago as my career took off & found less time to maintain it.

but now, with a little more time, three years of uncatalogued stinkpipe spots and with access to many more useful online tools such as Twitter and mapping websites, I have decided to resume this project, with a new Blog, and a Twitter account @stinkpipes .

I hope you can join me in this. It's simple. Take a picture of a stinkpipe you have seen. Send it to me via Twitter and state it's location. I will do the rest!

Thanks for reading and I hope you can send me many stench / stink pipes in the future!
No comments: